Everything you Need to Know about Sigiriya – Sri Lanka

The entrance to the inner citadel is through what’s known as the Lion Rock. This was a sphinx -like structure where people would have to enter the jaws of the lion to enter the city within. Unfortunately the rock has crumbled and all that’s left are the huge paws of the lion sculpture.

The lion staircase eventually leads after more than a thousand rock-cut steps into the palace garden, but halfway up the lion rock is the Mirror Wall or Kat Bitha as it is known in the local lingo.

This highly polished surface of rock has the world’s oldest graffiti on it. Some of the descriptions from previous centuries have allowed archeologists to reconstruct the majesty of the fortress in its heydays.

The main attraction on the mountain climb would have to be the frescoes of female figures in the cave known for its murals. Showcasing maidens in vivid colors and in various poses, these topless female forms are subject to strict security.

There were supposed to cover an entire rock face, but many have been damaged. Initially by monks who used the fortress as a monastery and then by vandals in 1967. Thanks to which today only 20 odd survive out of a reported 500 originals and must be viewed in the presence of security guards.

The summit is where you get a breathtaking view of the surrounding area and its villages. You can also see all the way to Dambulla on a clear day, about 19 km away. The entire climb can take about an hour and half so it makes sense to start off as early as possible in the morning. 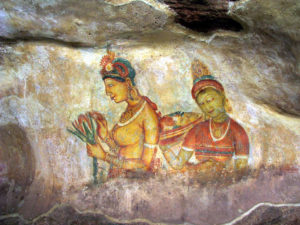 Taking a trek up to the fortress is the only major tourist activity that Sigiriya has to offer. There is little else to do in the town.

There is no industry and the local economy is totally tourist driven so do be careful of touts offering shortcuts to the fortress.

Most eateries offer fresh, wholesome and tasty Sri Lankan food. This usually consists of spicy curries eaten with rice. Some restaurants also serve western dishes like burgers and pizzas, but even these are influenced by Sri Lankan cuisine. There is no nightlife worth mentioning in Sigiriya.

There are the usual tourist souvenir shops with a few worthwhile articles but make sure you bargain for every item that you buy; most of them will be overpriced to start with. Warm clothes (secondhand) are also available, in case you’ve forgotten to pack in the woolens.

8 Reasons Why Ella, Sri Lanka is a Popular Spot for Tourists